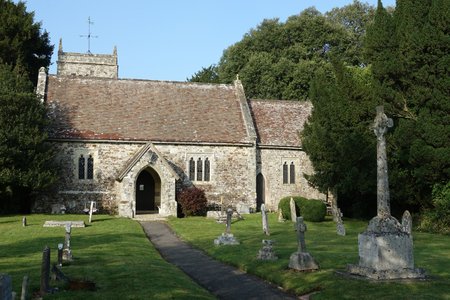 This small but pretty church was dedicated to St Nicholas in 1644. The date of the foundation is unknown, but the square stone pillars separating the Nave and North Aisle appear to be dated from the 12th century. There is a register of Rectors that starts  in the 14th century by the north door.  The church was extensively altered in 1863 when the west end Gallery was removed and the Hussey Vault in the North Aisle was covered over. At the same time the 16th and 17th century Hussey and Fry monument slabs were placed upright against the walls. A new font was put in near the Tower arch but now stands in the nave; the upper part of the older 17th century font still exists. The north door was the original entrance, the south entrance and porch was built in the 19th century when the road was diverted from in front of Edmondsham House.  There is a 19th century tombstone near the north east corner, with this delightful epitaph.

Behold and see as you pass by,
As you are now, so once was I.
As I am now, so you will be,
Prepare for death and follow me.

There are currently no Church Wardens for Edmondsham

In the meantime the Benefice Administrator will be able to help with any enquiries.

If you would like to get in touch with the Benefice Administrator, please email admin@kcb.org.uk