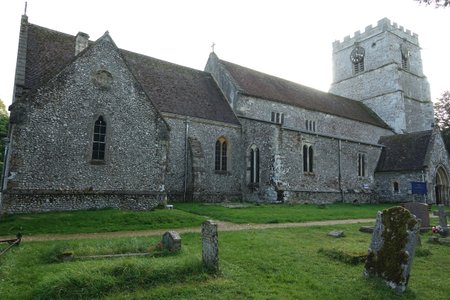 The ancient town of Cranborne derives its name from the Crane, the stream that runs through it. It is the Chaseborough of the Hardy novels and it was at the Fleur de Lys [soon to be known as The Inn at Cranborne] that Tess of the d’Urbevilles is supposed to have rested on her journey to Trantridge [Pentridge] The beautiful Manor House was the court for Cranborne Chase.

The Abbey of Cranborne was established in 980 and in 1102 the Abbott of Cranborne and fifty seven monks moved to Tewkesbury and Cranborne became a priory. This stood in The Old Vicarage Gardens and was demolished in 1703. The oldest part of the present Church of St Mary and St Bartholomew is the arch of the north porch doorway which dates from about 1120.The church was re-built in the thirteenth century in the Early English style and was re-consecrated in 1252.

The church contains many interesting , ancient and unusual features, including the Purbeck stone font [c1240], some notable mural paintings [c1240-1400] and a fine carved pulpit dating from the 17th century. A detailed guide to the church is available on entering the nave [£2] or can be viewed by clicking here.

The Church takes a full part in the rota of services within the Knowlton Circle Benefice and welcomes any visitors. Coffee is served after Parish Communion.

The famous Cranborne Church Fete takes place bienially in June in the Manor gardens by kind permission of Lord Cranborne.

If you would like to get in touch with the Church Wardens, please email crachurchwardens@kcb.org.uk